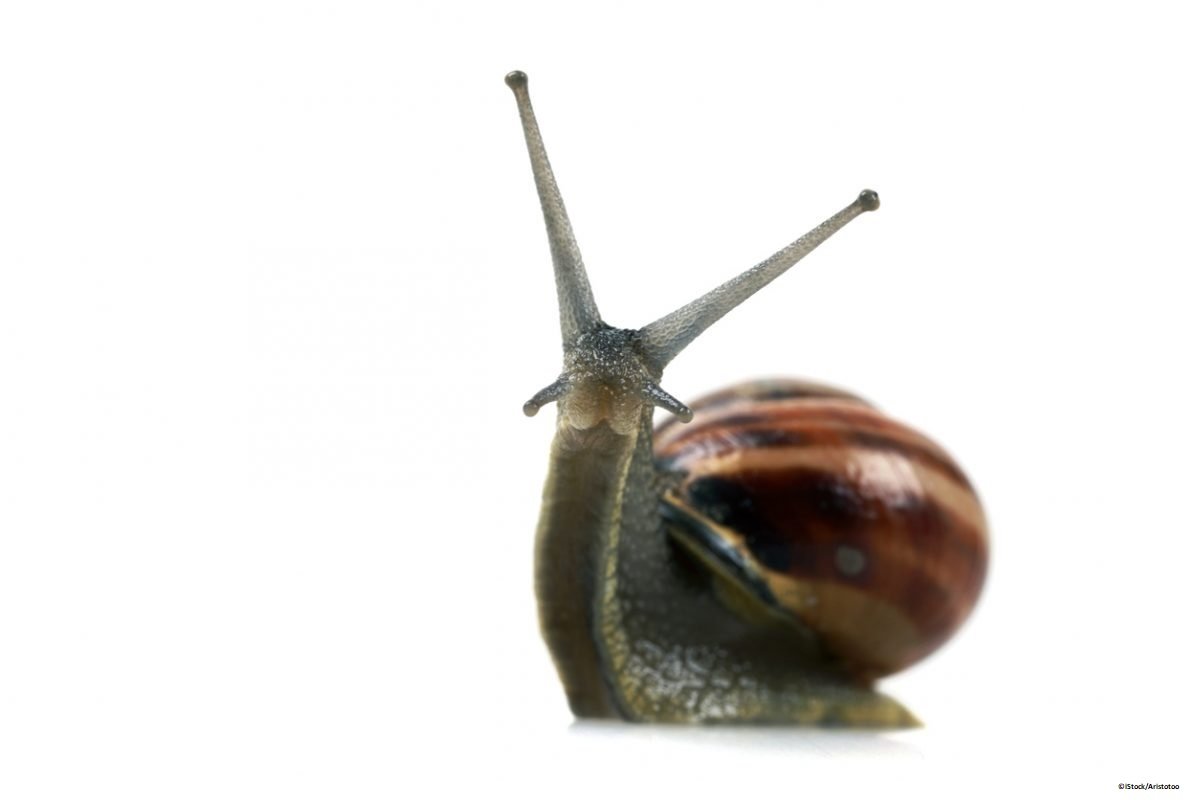 By Ryan Daws | 24th March 2020 | TechForge Media
Categories: Broadband, Capacity, Connectivity, Consumers, Europe, Fiber Optic, Industry, Infrastructure, Mobile, N America, Networks, Operators, Research,
Ryan is an editor at TechForge Media with over a decade of experience covering the latest technology and interviewing leading industry figures. He can often be sighted at tech conferences with a strong coffee in one hand and a laptop in the other. If it's geeky, he’s probably into it. Find him on Twitter: @Gadget_Ry

Ookla Speedtest is reporting a noticeable degradation of internet speeds in the US and Europe amid the coronavirus outbreak.

The drop in speeds has been most noticeable over the past week as more countries increase their lockdown measures, including the UK’s announcement yesterday.

In the US, the mean broadband speed dropped from around 140Mbps starting the week of March 9th, to around 133Mbps in the week beginning March 16th.

Canada also suffered a decrease in broadband speeds over the same period, dropping from approximately 129Mbps to 121Mbps. 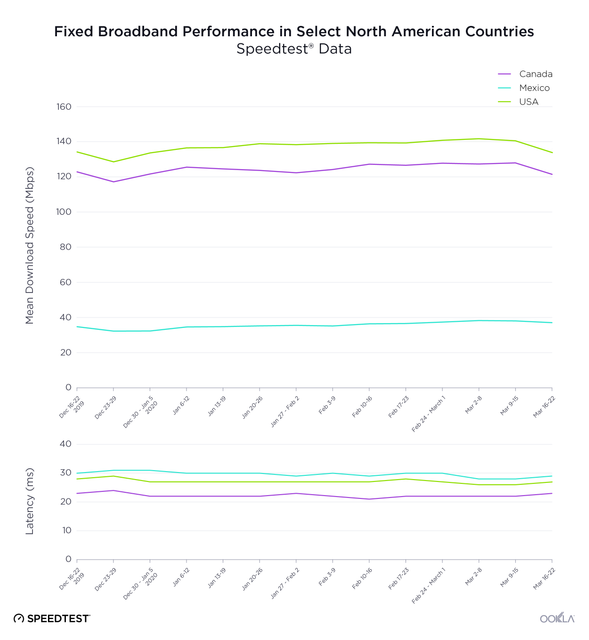 Countries across Europe also saw a decline in their mean broadband speeds, with Germany suffering the biggest drop from around 103Mbps to approximately 95Mbps. 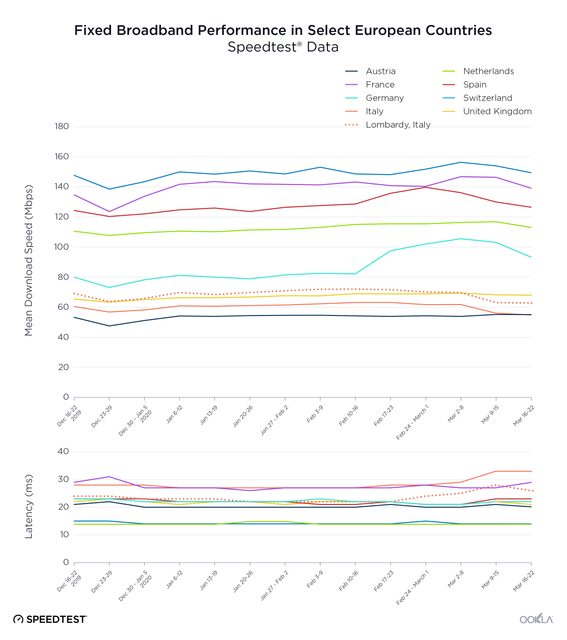 The UK’s broadband speed remained the steadiest in Europe. However, until yesterday, the country had implemented very little in the way of lockdown measures. It will be interesting to see whether the UK’s speed has been affected in the coming weeks.

Mobile networks were not excluded from performance degradation. In fact, a much larger drop was observed in many countries.

In the US, the decrease was minor. The week starting March 9th had a mean download speed of around 43Mbps, compared to a speed of approximately 41Mbps the week of March 16th.

Canada’s drop was also relatively small, dropping from around 74Mbps to approximately 72Mbps. 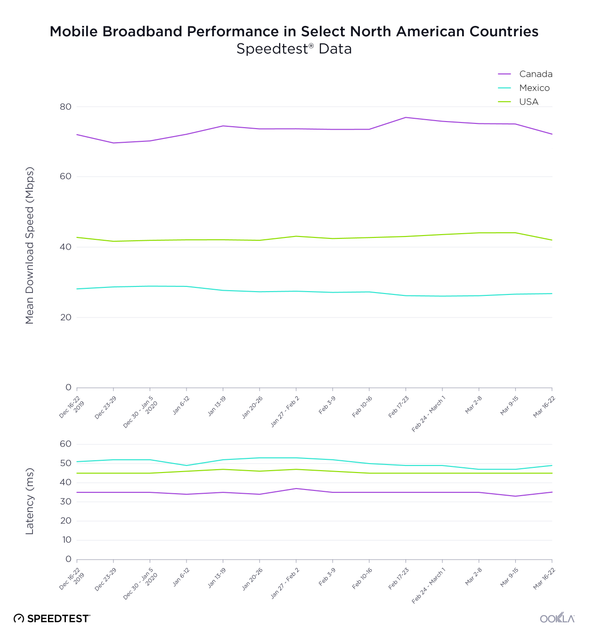 Europe is where things get a bit more interesting.

Spain, the hardest European country hit by COVID-19 after Italy, dropped from around 35Mbps to approximately 30Mbps over the same period. Similar drops of around 5Mbps can be observed in countries like France, Austria, and Switzerland. 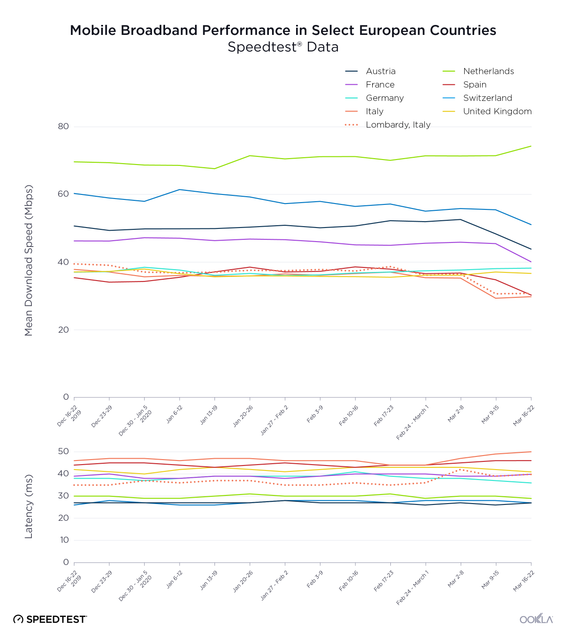 The UK and Germany managed to retain their mobile broadband performance, albeit starting from behind many other European countries.

Most fascinating is the clear outlier that is the Netherlands. The country managed to post its fastest mean broadband performance since last December.

The results from Ookla Speedtest appear to show that coronavirus-induced lockdowns are having some impact on most networks around the world as more people increase their work and leisure time at home. However, most of us would happily sacrifice download speeds if it means we also see a slowdown in COVID-19 infections.