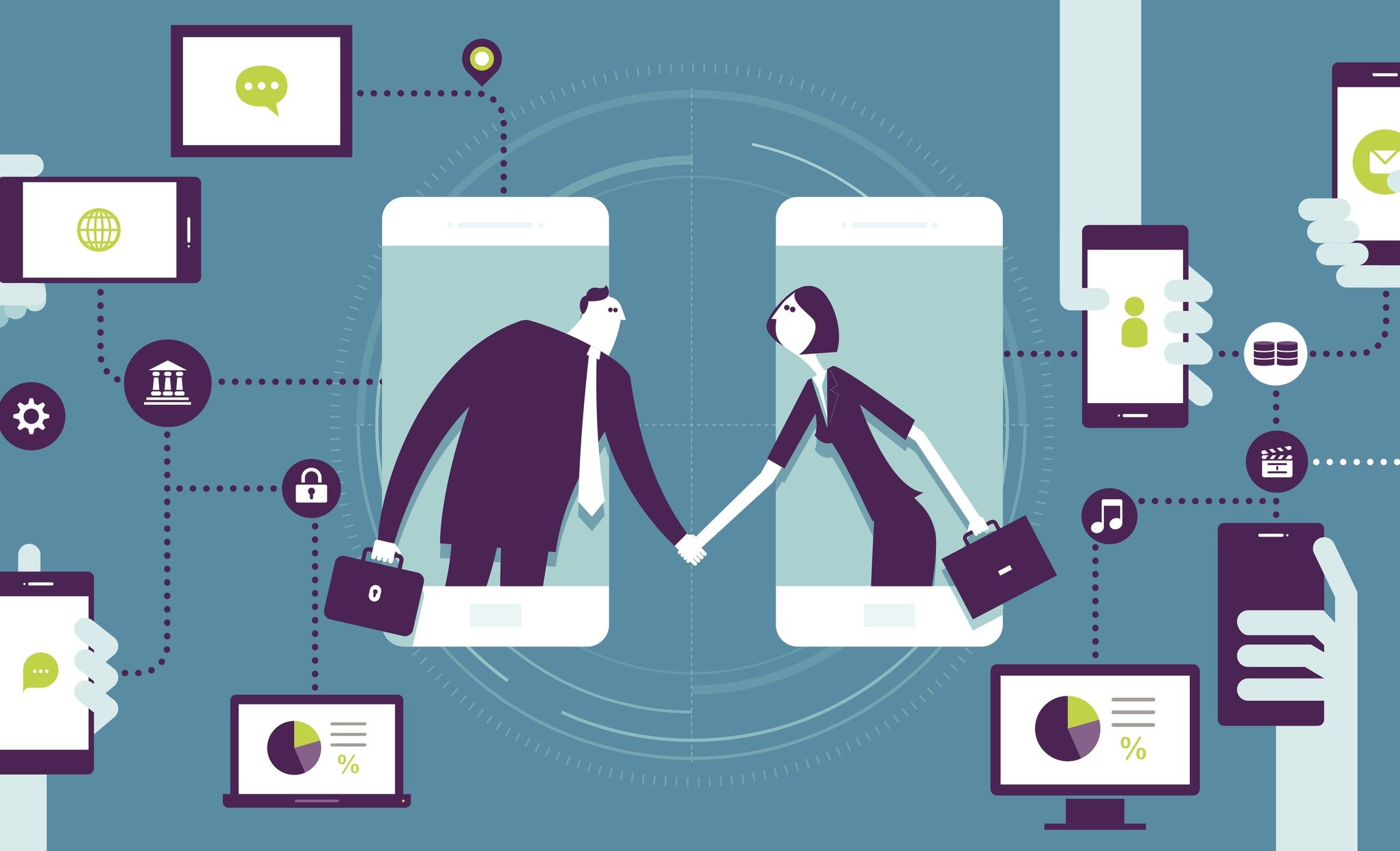 The industry has made bold promises about 5G and some have begun to question if they can be delivered.

Chris Nicoll, Principal Analyst at ACG Research, also pitched this question during a session at MWC in Barcelona which featured speakers from Nokia, Samsung, Evolved Intelligence, and the 5GIC.

Nicoll has written plenty on the promises of 5G in the past, and describes himself as ‘not a sceptic, but a realist.’

To kick off proceedings, Nicoll showed the audience a slide detailing the many areas where 5G is expected to have an impact: 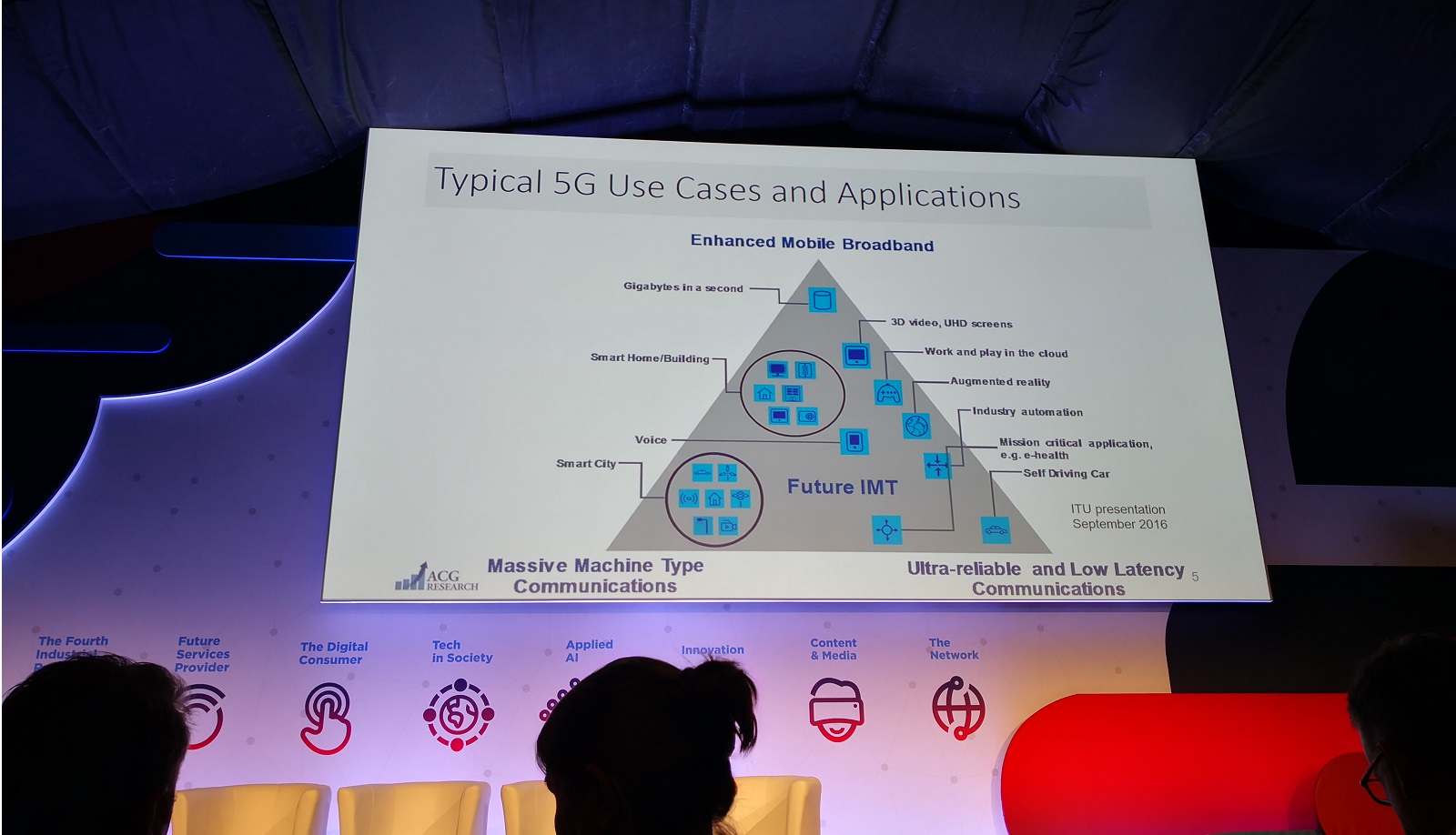 Some areas, like self-driving cars and medical applications, will require high reliability and low latency from 5G – or lives will be at risk.

Many expect the U.S. and China to be leaders in 5G with their vast resources, large talent pools, and historic rivalry. However, groundbreaking developments have been happening around the world – often in less expected places.

“LTE arrived in the developed nations first – fast, heavy, and hard,” says Nicoll. “5G will potentially have a much broader spread.”

Another slide details the fastest data speeds claimed in 5G trials around the globe. The fastest reported speeds are from Middle Eastern operators Etisalat, and Zain. Their claimed speeds (70+ Gb/s) are closely followed by Belgian operator Proximus, and Norwegian operator Telenor (~70 Gb/s) 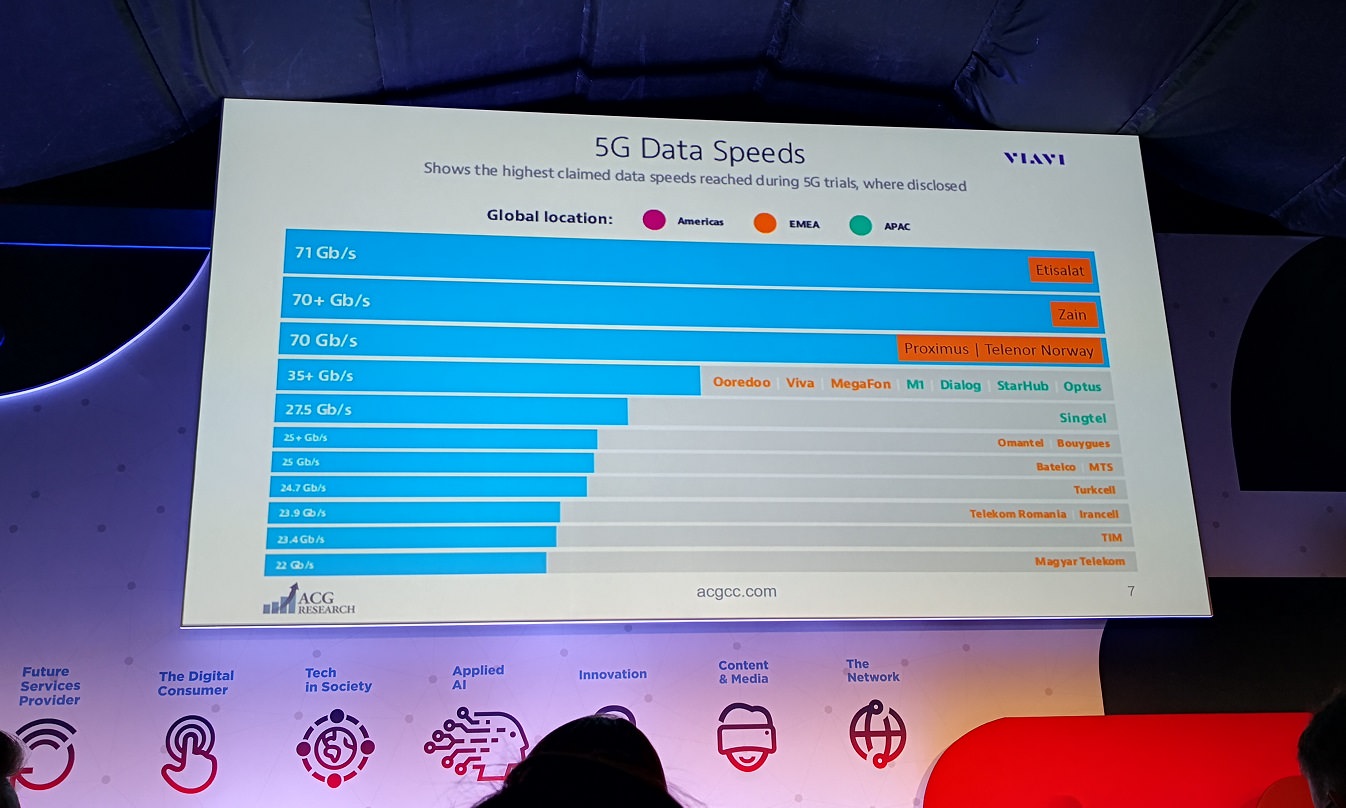 “The U.S. and China are expected to be first in 5G… I don’t see them on the slide,” comments Nicoll. “Nobody is talking about the Middle East as driving 5G. Turkey, although not quite the Middle East, has declared itself as going to be a leader.”

Samsung’s Head of Research, Dan Warren, is bullish on the industry being able to deliver on 5G’s promises.

“I can build you a high-speed, ultra-reliability, 100 percent coverage network today… you may not like the bill, but I can do that,” says Warren. “The problem with all of this is there’s a disconnect between the promises started around 5G and what it takes to actually deliver the ecosystem to enable the use cases.”

Warren shows us some of the promises: 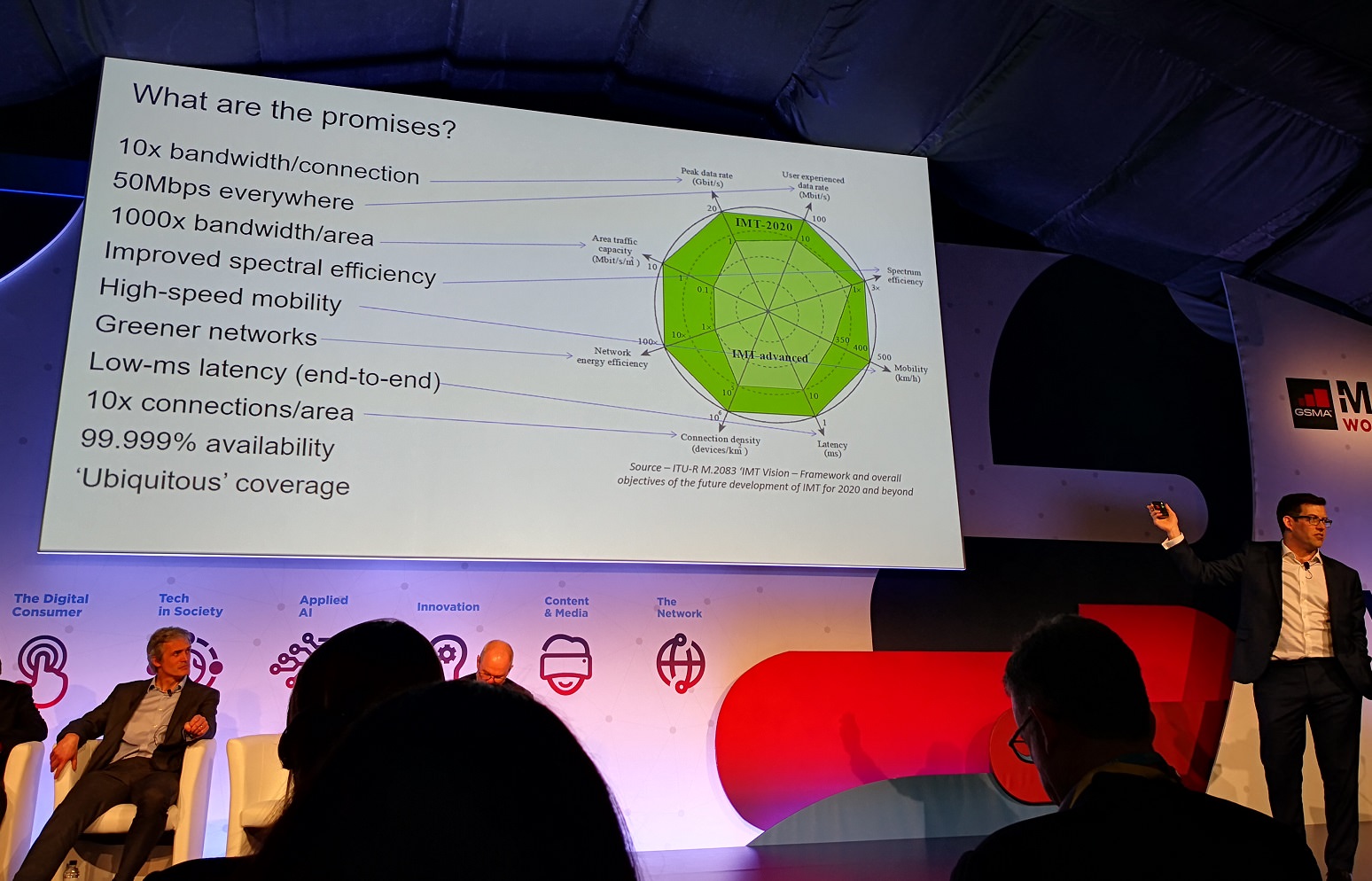 All of the promises can be mapped to what the ITU is going to assess, except the bottom two. IMT-Advanced is what was delivered with LTE, while IMT-2020 is obviously upcoming.

“99 percent availability and ubiquitous coverage, those are not technical challenges,” comments Warren. “Those are about the rollout. You need to have [small] cells everywhere. You need to have cells where cells do not go now. That’s not dependent on technology. If you’re building a 2G network, it’s exactly the same.”

“So, the reality is, all of these are going to be dependent on what is going to be deployed and how – rather than just promises the industry can make. The answer to ‘can we deliver?’ is what motivated these promises, and what are the implications of meeting them?”

One industry Warren says is organising itself is the automotive industry with associations such as the 5GAA. But even there, it’s incredibly complex.

An example is given of a car connected to Vodafone using V2N (Vehicle-to-Network) and then 2X (to-Infrastructure) to connect to a traffic light. Except that traffic light is owned by a different operator, so it’s now using V2N2N2X. Then it comes across others on other networks, so now we’re doing V2N2multiN2X. By the end, it’s doing some V2vN2hN2multi-N2X combination that looks more at home on Einstein’s whiteboard. 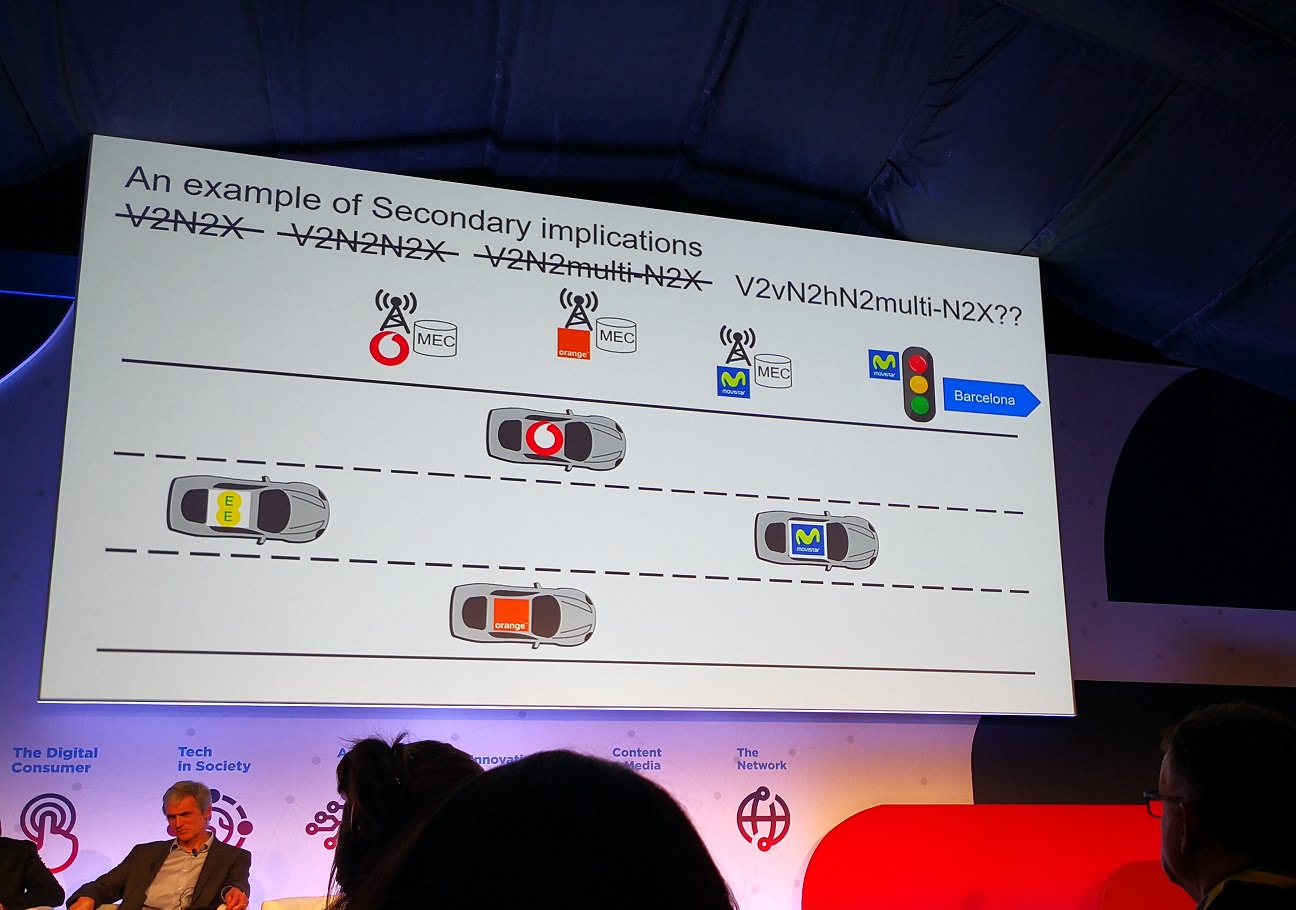 Next up to give his views is Stephen Buck, CEO of Evolved Intelligence, a provider of security and analytics services and solutions to the telecoms industry.

Buck raises concern about security, and how it’s got worse with each passing generation of mobile technology. But, he says, it doesn’t have to be that way with 5G. 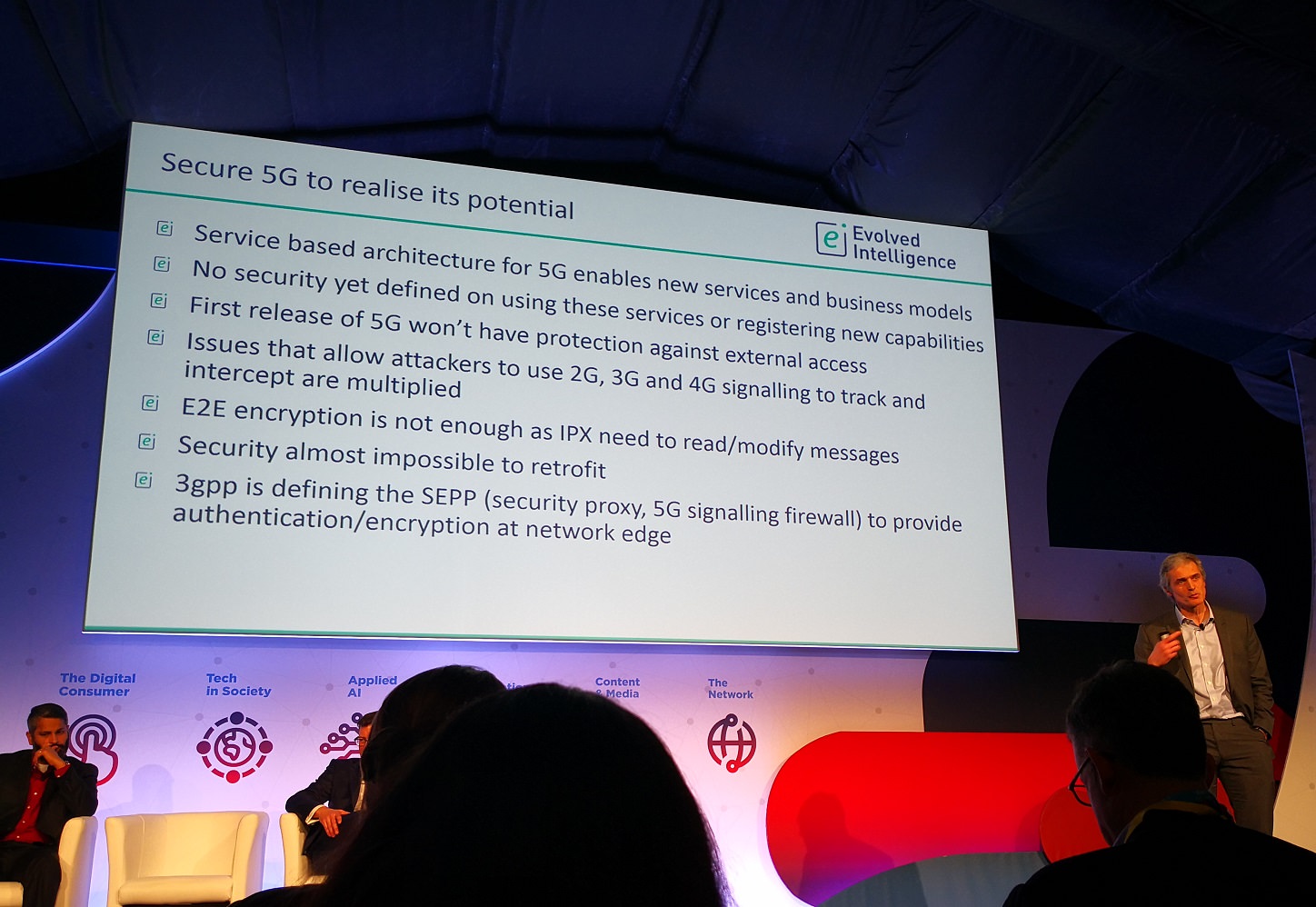 As per the slide above, Buck and his team have identified several issues with the first release of 5G that will not provide substantive protection against external intrusion and is ‘almost impossible’ to retrofit later. Furthermore, existing problems with previous mobile technology generations that enable things such as tracking and intercepting are multiplied.

“One thing that’s got worse is security,” says Buck. “The security in 4G, in terms of signalling, is worse than 3G. 5G, at the moment, looks like it could get worse again.”

5G will be used for some groundbreaking new things, and it’s even being talked about for performing remote surgeries. Nobody is going to put their lives on the line using a technology which can easily be hacked into.

Buck discusses the service-based architecture of 5G and how it’s opening up more seamless and intuitive experiences. On a recent trip to Indonesia, he ended up on the phone with his bank explaining where he was because it was flagged as potential fraud. With 5G, his bank could see he was in the country and the withdrawal was legitimate.

The aforementioned example is where the exposed network functions are used for good, but it could also be used maliciously.

“The API is there and the network functions exposed,” explains Buck. “But there is no security yet defined for those interfaces. I can register to use services I shouldn’t be able to.”

Tracking, intercepting calls… all of these things are being protected against in 2G, 3G, and 4G. However, in 5G it’s not yet protected against. The 3GPP are currently working on security in 5G with SEPP, but it’s yet to be defined. For the next release of 5G, it needs to be implemented.

“You need to add AI all over the network – at the radio, at the baseband, at the edge cloud, at the central cloud… for making the network know what’s actually going on,” says Tervonen. “That’s one of the key features of 5G … fast flows, slow flows, real-time, low latency services, massive communication capabilities … all of that is needed to make a network really intelligent.”

Moreover, the network needs to be powerful – in terms of compute capacity. All the real-time decisions on selecting which flows to schedule, how to do beamforming in the radio, how to schedule the users… all that needs to be done super fast in a network that’s now 100x more complex. The only way to do it is through machine learning and AI capabilities, argues Tervonen.

The final speaker is Stuart Revell, Managing Director of RTACS Ltd, who is currently working with the 5GIC University of Surrey on the definition, external engagement, and adoption of 5G and IoT-based technologies and architectures. He also believes we can deliver on 5G promises but agrees there are still a huge amount of challenges to be addressed.

Part of Revell’s work involves the 5GUK testbeds at King’s College London and the universities of Surrey and Bristol.

“5GUK is actually three testbeds connected together with full end-to-end meaning user, to NR, to core… interoperable across a boundary to another network. So a network of networks,” says Revell. “Remember that, because for 5G to become a reality – when you look at the definition of 5G – no one network can deliver that.”

Revell makes reference to Warren’s earlier example of a car requiring to make a complex number of transactions, and the need to reduce that complexity. This could be solved by creating a data marketplace to satisfy those needs, where the similarities to IoT principles come into play.

“What I’m calling for is more innovation above the technology layer to empower 5G,” explains Revell. “We can deliver on our promises, but we need a lot more collaboration.”

Do you think 5G will be able to deliver on its promises? Let us know in the comments.