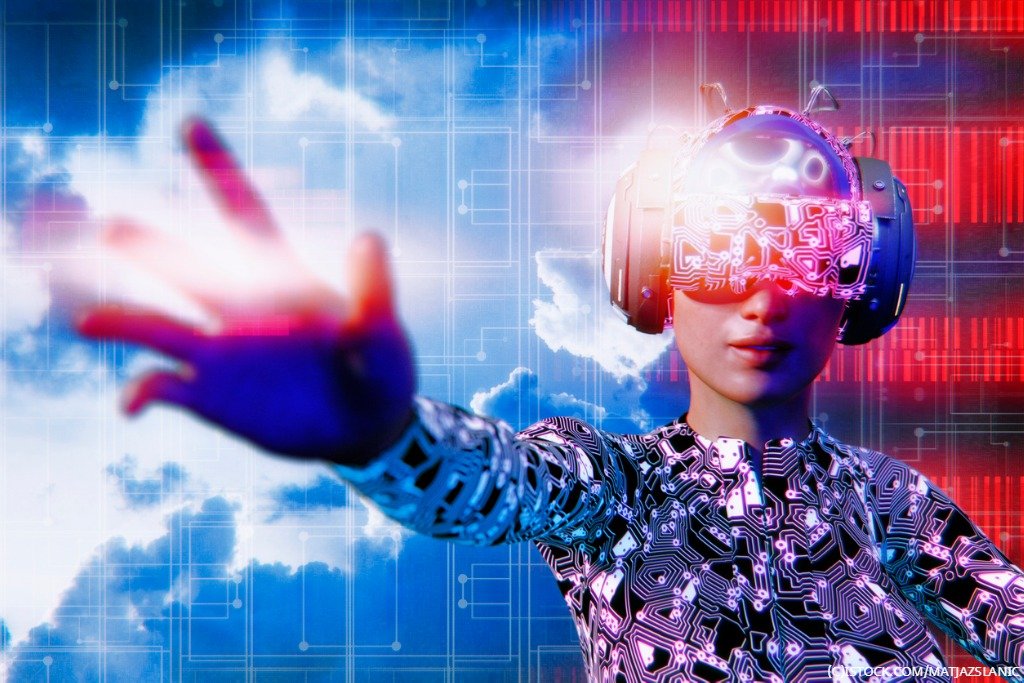 Augmented reality (AR) and virtual reality (VR) have the potential to become the next big platforms after PC, web, and mobile. Isolated applications of AR and VR have been around for a while, but the technologies to unlock their potential have only recently become available. We expect AR and VR to fundamentally transform how consumers interact in the physical world and how enterprises run their operations.

In a nutshell, AR overlays digital imagery onto the real world, while VR immerses a user in an imagined or replicated world (see exhibit 1). 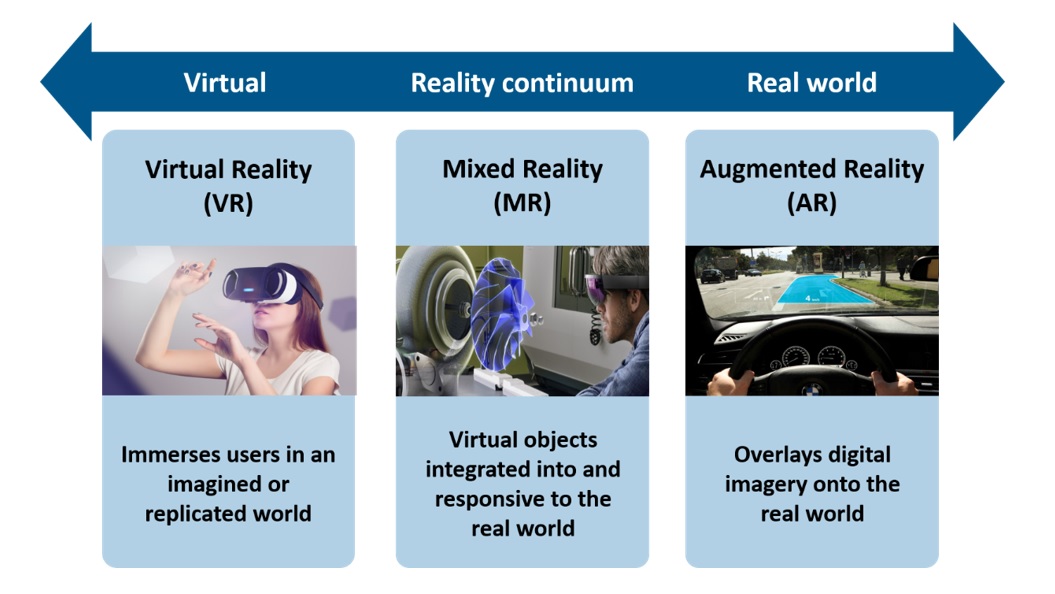 Fundamentally, AR and VR create a new way of interaction using gestures and graphics that are highly intuitive to humans. VR creates an illusory “sense of presence” in an imaginary world created through a computer-generated simulation. For instance, this allows users to experience travelling, shopping, creating, talking or interacting with people remotely in a completely different way. In contrast, AR allows people to access digital information in their real-world environments, thereby allowing “simultaneous existence” in both physical and digital worlds. Both AR and VR are transformative in nature and likely to co-exist as immersive platforms.

A whole new realm of opportunities

We are still at the beginning of the AR and VR revolution, but there is no doubt that they have the potential to revolutionise multiple industries over the next five to ten years, transforming the way we interact with the surrounding world, unlocking new experiences, increasing productivity and efficiency (see Exhibit 2). 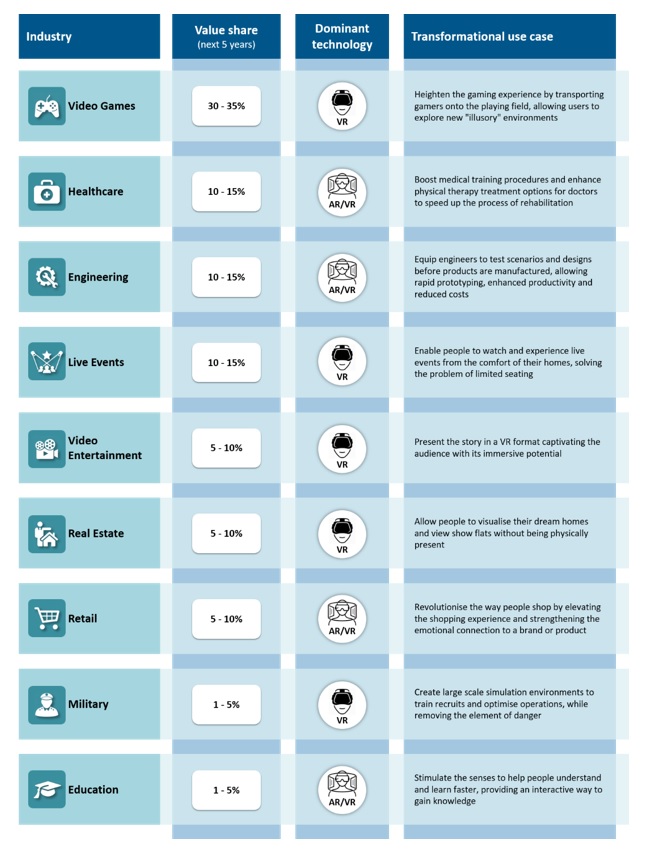 From the use cases, one can infer that AR and VR will create a shift that is comparable, if not greater, than that of the smartphone and underlying platforms.

This potential has been recognised by major technology giants and OEMs. Facebook made an early bet in 2014 when it acquired Oculus for $2.1bn and since then it has acquired over ten other AR/VR players. Other technology giants have followed suit – Google launched Google Cardboard, Google Glass and backed Magic Leap; Microsoft launched HoloLens and Apple acquired AR software maker Metaio. Samsung has multiple projects coming from its in-house C-lab incubator such as Monitorless (PC-viewing glasses), Vuildus (VR home furnishing), Relúmῐno (smart aid for the visually impaired) and TraVRer (360-degree travel video platform).

While technology giants and OEMs have been leading the charge, telecom operators have been slow to react, but, in recent years, we see operators in developed markets beginning to dip their toes in the water. For example, Telefonica launched start-up incubator Wayra currently supporting eight VR and four AR start-ups. SK telecom has developed 360-degree VR live broadcasting capabilities and BT is trying to revolutionise the sports experience through VR enabled football match telecast.

For AR and VR to become the next big platforms, challenges must be overcome

While significant progress has been made in this space over the past few years and the ecosystem today has hundreds of companies, thousands of employees and over $4.5 billion invested, with expectations to become a $80-100 billion industry by 2025, AR and VR today are still emerging technologies.

For AR and VR to fully materialise and provide the impact described above, significant hurdles need to be overcome.

These can be grouped in four main categories:

The case of Pokémon Go (free-to-play, location-based AR game) clearly illustrates the situation. When Pokémon Go was released in July 2016, it exceeded 100m downloads within a month of its release, becoming the most downloaded mobile gaming app of 2016. It single-handedly proved how profitable and widespread AR could be, generating over a billion dollars in revenue for developer Niantic. This was achieved with a game that was “simple” enough to work with smartphones without the need of any additional device and the content was a “killer hit” as demonstrated by the take-up.

Despite the success, key issues emerged in terms of device capabilities and network. Pokémon Go requires the smartphone device to have long battery life, GPS sensor and compass. Users without these functionalities would drain their batteries within a few hours or have to settle for a pared down version of the game which detracted from their enjoyment and experience. On top of device capability issues, Pokémon Go also experienced issues on mobile networks. Despite only taking up roughly 0.1% of the overall traffic, the game accounted for >1% of all sessions on the network. This ten times  differential was the result of communication sessions opening with Niantic servers every time an event happened in the game. Driven by the massive uptake, the cumulative effect from both bandwidth and sessions negatively impacted networks, especially when the game drove large groups of players towards specific geographical areas.

What role can telecom operators play in the AR and VR ecosystem?

As mentioned, telecom operators are yet to make a credible play in this space. However, we believe that they can play a fundamental role in helping overcome some of the challenges illustrated and thereby enable earlier materialisation of the AR and VR promise. This is where operators’ typical strengths such as network infrastructure deployment or devices distribution capabilities come into play.  But beyond helping drive these new technologies, we believe AR and VR have the power to transform the role of operators in the ecosystem.

If we believe that AR and VR will be the next big platforms, we should be able to imagine a world where we no longer look at our phones, but rather look up to visualise the content in front of our eyes, and interact with the device through machine-learning enabled voice or visual recognition. In this scenario, the role of the smartphone would be significantly diminished.

This would provide a fresh opportunity for operators. Operators have missed the opportunity to play a significant role in the smartphone ecosystem – in terms of capturing share of a customer’s mind and interaction time, and therefore monetising it. However, if the role of the smartphone diminishes, and new platforms take over, then opportunities arise for operators to play a pivotal role in the digital ecosystem beyond connectivity. This is where the roles of ‘open enablement platform’ and ‘application and content provider’ become relevant for operators.

Pragmatically, we have categorised the role of operators in the AR / VR ecosystem in four groups based on the level of involvement of the operator and the expected transformational results:  1) Device distributor, 2) Connectivity provider, 3) Open enablement platform, and 4) Application and content provider. 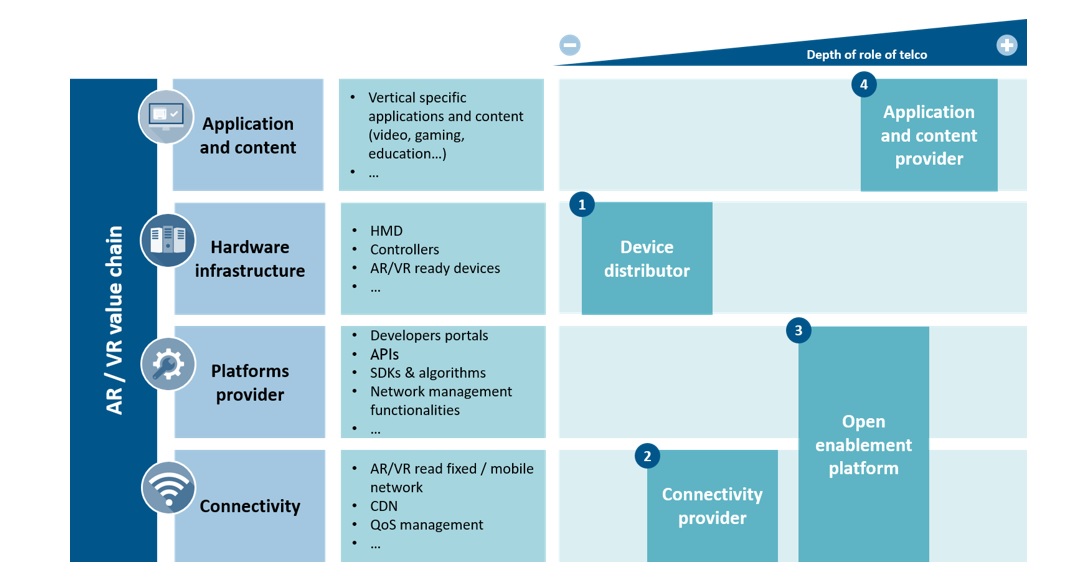 While AR and VR are still emerging technologies, their mainstream adoption will increase dramatically as hardware costs fall, device functionality gets more sophisticated, more ‘killer’ content is developed, and network speed and latency improve. While it’s true that in the short-term, AR and VR will remain relatively niche, the mid to long term potential could be transformational.

Operators can adopt a passive approach, where no specific step is taken in the advancement of the AR and VR industry beyond the ongoing modernisation of the network (e.g. 5G deployment), which naturally supports the materialisation of the AR and VR promise. This is unlikely to result in significant monetisation potential, and could further decrease operator relevance in the ecosystem, pushing operators further towards being pure connectivity providers.

Alternatively, digitally-minded ambitious operators can champion and drive the AR/VR space by positioning themselves deeper in the value chain as a ‘platform enabler’ and/or ‘application and content provider’. This implies early investment in the required network capabilities, build-up of additional competencies on top of the connectivity layer and collaboration with technology players that are pushing the boundaries of the industry to develop end-user solutions. Operators that choose this path and do it right can leverage the novelty factor to reposition themselves within the ecosystem of tech and device players, and in the eyes of the end user.

The telecom industry track record suggests this is a long shot for operators. Over the last decade, they have generally been poor at innovation and have time and again missed the opportunity to leverage their unique assets to position themselves strongly in the digital space. Nevertheless, there is intention from many leading operators to make a serious play within the digital space – AR and VR could well be the foundation to spearhead this transformation.