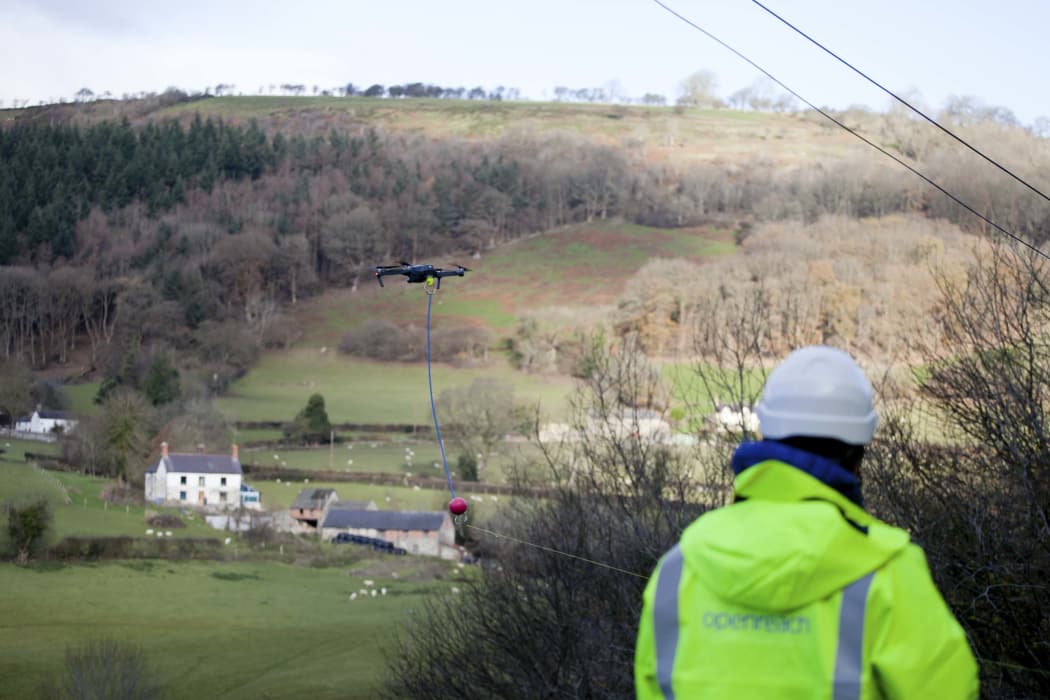 The drones help to lay a fibre cable across routes that would have been difficult to deploy across. Due to the small drones used, the actual fibre cable was too heavy for them to lift directly.

Instead, Openreach engineers are using the drones to fly a high-strength fishing line around 100 meters and drop it across the top of the trees. That line was attached to a draw-rope which pulled the fibre cable along the unobstructed route laid by the drone.

One rural village, Pontfadog in Wales, now has access to full FTTP (Fibre-to-the-Premises) as a result. Residents can pick their package from 38 Mbps all the way up to 300 Mbps.

“There’s a particularly steep drop-off from these houses back down the valley, and it’s covered in dense trees and scrubland. We also had the river running along the bottom to contend with, so dragging a cable and digging it in wasn’t really an option,” explains Openreach’s Chief Engineer Andy Whale.

“If we tried running the cable through woods it was also very likely we’d get it caught up in branches and other natural obstructions, so we figured the best option was to fly it in over the top of the tree canopy and then lift it up to make sure it was clear of the tree line.”

These speeds are faster than most UK premises, even in major cities, where FTTC (Fibre-to-the-Cabinet) is still primarily used. The use of FTTP will help to ensure the connection is future-proof for quite some time.

Villager Chris Devismes is one of the first to get connected up to the new high-speed network. He said: “I’m an aspiring writer, I work from home and publish my work online – so I do send full novels over the web to my editor or to readers. Before I would go away and cook tea whilst a file upload went through, but now it literally takes a matter of seconds.”

While impressive, Openreach did not undertake this important task purely from kindness or even profitability. The infrastructure provider is rushing to connect Wales due to a contractual deadline of 31st December fast approaching.

“Had we tried to lay the cable using standard methods, even if it were possible, this process would have taken days — but in the event, it took us less than an hour,” comments Whale.

Right now, it’s quite simple to obtain and operate a drone. However, new UK regulations are set to come into force which is going to put more restrictions on their usage following serious incidents such as drones having near-misses with aircraft.

The proposed regulations will require drone users in the UK to undertake safety awareness tests — operators will be banned from flying near airports or above 400ft, and police will get new powers to ground and seize drones if they suspect they had been used in unsafe or criminal activity.

"We're bringing forward this legislation in order to ensure that drones can be used safely, whilst also addressing some of the safety and privacy concerns that people have," says Lady Sugg, Transport Minister.

Openreach has shown how drones can be used safely to make difficult tasks simpler and quicker to complete. We hope the new regulations strike a good compromise between safety and ease-of-access to allow positive and innovative uses to flourish.

Are you impressed with Openreach’s use of drones for rural broadband deployment? Let us know in the comments.