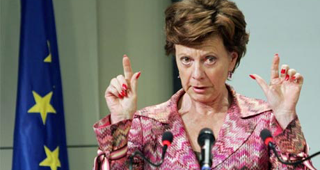 Neelie Kroes, Vice President of the European Commission, has been on a mission for a single telecoms market as TelecomsTech first reported back in January.

Now she’s advancing the attack; pushing for the end of mobile roaming fees by 2014 in a speech to the European Parliament.

Hopefully you’ve avoided them, but most of us at some point have been stung by shocking roaming charges caused by using your mobile abroad; although these are already lower than they were this time last year, thanks to an EU approved cap on calls, texts, and data.

This is all part of Kroes’s plan for a single telecoms market to help with “net neutrality”, arguing that this would help boost the economy across Europe; helping not just digital ties but also political connections as well.

It’s a grand plan, and one she states has the support of the “highest level in institutions” although is being grounded on the matter it may not give everyone involved “everything you dreamed of”.

In Kroes’s home country – the Netherlands – the legislation has already been passed as of May last year, through striking a “sensitive balance” she hopes to have the result signed and presented by Easter 2014 throughout the EU.

Despite the boost to the economy, the consumer will see the biggest benefits, taking away all the confusion of various charges and keeping to one cheaper rate.

A comment on a TNW article by ‘Mr Ladoodle’ sums it up well: “We need more politicians like Neelie Kroes. I admire her work and determination. It makes no sense to have to roam from Vodafone UK to Vodafone DE etc when it’s the same company.”

Are you ready to scrap mobile roaming fees? What do you think of Neelie’s work towards a single telecoms market?