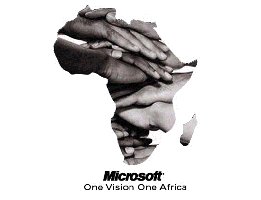 Whilst Bill Gates may be spending less time at Microsoft, instead focusing more on incredible global philanthropic work with his – and his wife Melinda’s – Gates Foundation.

The research teams back at Microsoft have launched a third pilot in Africa to explore the possibility of low-cost broadband.

The Redmond-based giant has had previous forays into Africa under the aptly-named ‘4Afrika’ initiative – now in its third iteration – this current pilot makes use of TV and solar-powered base station’s “White Space” for testing wireless broadband services to five schools in Limpopo.

White Space is the name given to unused frequencies which can be made use of for testing without interfering with current broadcasts.

Since power can be an issue in such regions – but sun tends to be in abundance – solar panels will charge devices where electricity is unavailable.

Going beyond trying to provide the internet access which most of us take for granted, the company will be fitting the schools with Windows-based tablets and projectors, while teachers will get laptops and training.

As the internet becomes almost indispensible; with the ability to communicate with the wider world, learn new knowledge, and expand businesses – this will help grow Africa’s economy.

Mteto Nyati, managing director of Microsoft South Africa, says: “Reducing the cost of broadband access means millions more South Africans will get online. This will create new opportunities for education, healthcare, commerce and the delivery of government services across the country.”

Currently ISPs charge $35 for 1Mbps ADSL service – which is virtually inaccessible for many. The new scheme expects to launch at four times the speed for over ten times cheaper per month. Initial costs appear to be estimated around $2 – $3 for 4Mbps.

Whilst this is likely to be launched quicker to the gratitude of Limpopo residents, I still have my affections towards Google’s “internet balloons” idea TelecomsTech reported on two months ago.

What do you think about Microsoft’s 4Afrika initiative?