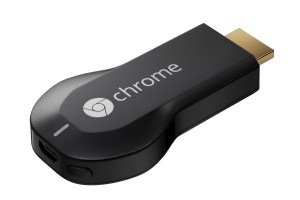 The genius minds over at Google have just secured themselves an unstoppable force in the TV entertainment market; making a streaming device so well-priced everyone wants one – sometimes even multiple for every HDMI port in their home.

If you haven’t heard, Google’s Chromecast is a dongle which allows applications such as Netflix and YouTube to be streamed on any screen with a HDMI port.

You may be thinking,”ok, cool, but how does this disrupt everything?”

This is important. Accessibility is key; the widespread nature of this device will have more reach than devices such as the Apple TV, and of course, being Google – it’s also cross-platform.

Now, think about the device in your pocket. It’s probably packed with a quad-core processor capable of 4K video streaming and incredible gaming, which is only set to get better. In fact, consoles exist such as the OUYA which essentially are made obsolete through the ease of streaming from the device which is always on you, to a tiny dongle available anywhere with a HDMI port.

By the time Android’s next major releases rolls round around October; you can be sure full mirroring will be available at a system-level, and it will be awesome.

Imagine going to a friend’s house and you want to show off / bore them with holiday photos, send them straight to your nearest TV. Then maybe when you’re done, open Riptide GP2 and have a multiplayer game with them.

The innovative applications for this kind of accessible (and I can’t stress accessibility enough) is endless. How about a bar which you can use their app to queue your own tracks? Ok, everyone may not have my superior taste in music, but it would be cool nonetheless.

Fact is, Google provides the technology, and it’s up to the development community to provide the applications. Get this in enough hands, like it seems almost certain to be, and you have a fairly future-proof device for the next few years – which advances alongside every major platform.

What do you think about Google’s Chromecast and its future applications?