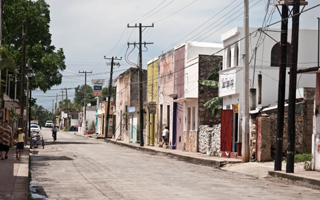 What do you do if you live in a remote Mexican village completely ignored by any telecoms operator? Sit back and continue this Amish-style lifestyle? Of course not, you stand up and create your own cell service.

In the southern state of Oaxaca lies the indigenous village of Villa Talea de Castro. Housing the relatively small population of 2,500 – it’s simply not seen as a profitable area for providers such as tycoon Carlos Slim’s America Movil.

Rather than the village going without; they worked alongside indigenous groups, civil organisations and universities to put up a perch-like antenna on a rooftop. Then, by adding radio and computer equipment, they created their own micro provider called Red Celular de Talea (RCT)

The new local service costs 15 pesos (US$1.2) per month, which is 13 times cheaper than a bigger firm’s basic plan in Mexico City. Calls to the US cost a few pennies per minute and are connected using VoIP (Voice over Internet Protocol) technology.

Since, other communities have shown an interest in setting up similar schemes. The equipment was provided by the California-based Range Networks, including; 900 MHz radio network, and computer software that routes calls, registers numbers and handles billing.

Due to the lack of bandwidth and availability however, the service does come with a catch. Users are limited to a maximum of five minutes for the time being as not to clutter the lines and cause issues or complete failures.

For the continuation and expansion of these services; RCT volunteer Hernandez is pushing for co-operations with other villages to drive the Mexican government to resolve “this lack of free frequencies for cellphone communications in the country’s rural communities.”

In order for a large telecoms provider such as America Movil to take an interest; at least 10,000 potential customers must be in the area – as well as a clear path for power and erection of the antenna. Not terms many of the villages can meet; although Movil controls 70% of Mexico’s mobile phone market and has 262 million subscribers across Latin America.

Since launch; the village-built service has attracted 600 subscribers.

What do you think about this Mexican village’s predicament and ambition?