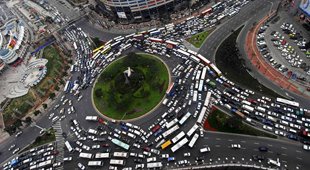 By James Bourne | 13th September 2012 | TechForge Media http://www.cloudcomputing-news.net/
James is editor in chief of TechForge Media, with a passion for how technologies influence business and several Mobile World Congress events under his belt. James has interviewed a variety of leading figures in his career, from former Mafia boss Michael Franzese, to Steve Wozniak, and Jean Michel Jarre. James can be found tweeting at @James_T_Bourne.

Government legislation is at the top of the list of influences on Latin American markets, according to Scott Sedlik, vice president of marketing for INRIX. CONTRAN 245 is Brazil’s legislation requiring all new vehicles to be equipped with tracking modules; it’s in the early stages of implementation and will benefit hardware manufacturers.

One differentiator in Latin America is that most vehicles are sold without installed infotainment systems; in many cases, without even radios, Sedlik says. This is because, not only are passenger cars expensive, consumers also pay higher taxes. So the communications devices taken for granted in the United States and Europe are a separate purchase in Latin America.

Brazilian car-shoppers just got hit with a whopping tax on cars that were not produced in Brazil. Designed to encourage local manufacturing and assembly, the additional tax bill increased the cost of a BMW by $5,000, money that might not now be spent on a fancy infotainment system.

Advantages of the aftermarket

Price aside, saving infotainment purchases for the aftermarket offers better opportunities for hardware manufacturers. The separate path to purchase of cars and infotainment in Latin America allows consumer electronics vendors to innovate at their own speedy pace, instead of being tied to the longer production cycles of the automotive industry. They can offer a variety of infotainment systems at a variety of price points and tweak their product lines to suit the market, instead of tweaking them to suit OEMs.

“It gives the consumer significantly more flexibility in the types of systems to include in the car,” Sedlik says.

“You need to approach each country in a different way,” says Marcelo Catapani, global sales director for Quanta, one of the biggest telematics hardware suppliers to the Brazilian aftermarket, which now also sells into Argentina, Colombia and Chile.

Flexibility has been key to Quanta’s growth. Aside from differences in culture, the telematics business model has evolved differently in each one. For example, in Colombia, network operators are fully involved in selling tracking systems into the market. Quanta prefers to sell its devices directly to the service provider, but it will go to market with whatever partners are useful for that market.

That flexibility extends to connectivity options. Quanta’s tracking products typically ship with an embedded GSM modem and GPS, but it also provides hybrids that work with GSM/GPRS connections, along with a wired antenna for satellite communications. “When you have a big transportation company, they will go through areas not fully covered, so they need this kind of flexibility,” Catapani notes.

Companies working in Latin America also need to tailor their offerings to meet different use cases. Take navigation, for example.

Frost & Sullivan expects the Latin American market for navigation systems to be at a mere 5 million units by 2016, compared to 18.7 million units in North America. Smartphone navigation subscribers will be around 160.8 million, the research firm predicts, plus an installed base of 21.4 million telematics service subscribers.

What navigation services would lure drivers away from free? Sedlik points out that traffic is horrible in Latin America. In Sao Paolo, the commute takes drivers zigzagging through city streets in an attempt to find less congestion for a block or two. INRIX is rolling out a crowd-sourced, real-time traffic service that will let local drivers report traffic conditions and help others avoid a mess.

CONTRAN 245 could boost the telematics market in Brazil. While the legislation applies to new cars, Capitano sees it fueling the aftermarket as well, but only temporarily.

“After the third year, I believe the aftermarket volume will start decreasing,” he says. “Quanta has been preparing itself in order to move in the direction of providing to OEMS some kind of solution. Also, we are focused on some niche markets like hybrid solutions.”

Meanwhile, the embedded tracking devices open the door to more value-added services, Sedlik thinks: “It will be more locked in, but there will also be models that have some flexibility built into them.”

In some cases, security will be the only service, but in others the vendor will have the ability to add additional driving services later, both in OEM-installed and aftermarket devices. “Once you have a modem in the car, or connectivity through the phone, for stolen vehicle tracking,” Sedlik says, “OEMS are looking at how they can provide additional services.”

The business model, however, is still to be determined—in Latin America as in the rest of the world.

“OEMs have been struggling with what is the right model,” according to Sedlik. “GM has a version of OnStar in Brazil, Mexico and certain other countries; its’ actually been deployed by a partner. They’re trying to figure out what is the best strategy going forward.”

Telematics vendors and service providers also face increasing competition from mobile network operators. While in the United States, telcos have only recently entered the automotive market as extensions of their M2M services, Telefónica is moving aggressively into Latin America, according to Catapani.

Penetration of telematics into the insurance vertical in Latin America is more extensive than in Europe or the United States, but the focus is on reducing the risk of theft and finding stolen vehicles. “We are in the beginning stage. Insurance companies at this point haven’t started analyzing the driver behavior; they are just worried about theft,” Catapani says.

News about CONTRAN 245 will help raise consumer awareness and demand for other telematics services, Catapani says: “I believe we have the opportunity to sell other products with much more features than we have currently.” Two likely areas, he thinks, are expanded insurance offerings that measure driver behavior (including miles driven, hard braking, hard acceleration) and fleet management applications.