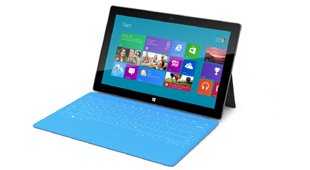 Many of the rumours around Microsoft’s product launch in LA were proved correct last night when the company belly-flopped into the tablet market, announcing its new range of Surface tablet computers.

Throwing its hat into a ring dominated by Apple’s iPad, and competing with a strong product from Amazon and a host of lesser Android tablets, the Surface faces an uphill struggle to gain traction in the hearts of both enterprise and consumer users.

However, throwing down the gauntlet to the established tablet players, the Surface has introduced some innovative features that immediately make it stand out.

The 10.6 inch tablets, with a bigger display than the iPad, operate with a stylus input, and come with a range of magnetic 5-mm thick Touch Covers that act as kick stands and double as keyboards with built in track pads.

Two different versions of the Surface tablet are available, one running on ARM based processors running the Windows RT operating system, the other running Windows 8Pro through an Intel processor. The professional version of the Surface will be launched three months after the Windows RT tablet, the company said.

“We took the time to do something that is very different and very special,” said Steve Ballmer, announcing the launch in Hollywood last night. “Because of Windows 8, the Surface is a PC, is a tablet, is something new that we think people will love.”

The company was hazy on prices, which are expected to be announced in October when the devices become available for purchase, however, it said that the price is expected to be competitive with a comparable ARM tablet or Intel Ultrabook-class PC.

At this point the Surface launch constitutes a shotgun strategy encompassing both the commercial and enterprise sectors. With snazzy colourful covers that wouldn’t look out of place in a school, nestling alongside ‘Digital Ink’ stylus input and classic Office tools, it will be interesting to see how each market takes to Microsoft’s newest toys.

The Touch Cover really does represent something new in the tablet arena; Microsoft’s innovative attempt to bridge a gap between the worlds of tablets and laptops is something that Apple doesn’t provide for the iPad.

User’s willingness to make the change to Windows 8, a superior but wholly different operating system to its predecessors, may be the key for the success of the surface. And while some industry commentators doubt the Surface’s ability to steal market share from the likes of Apple and Amazon’s Kindle Fire, Microsoft could do worse than to pick up new users by launching a strong product into a rapidly growing market.

What are your predictions for the market performance of the Surface tablets?