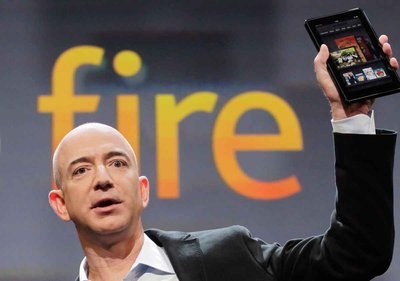 Amazon has finally unveiled its new colour tablet, the Kindle Fire, as it prepares to lock horns with a number of industry leaders on various fronts in what is a ferociously competitive market.

The new device, already being touted as stiff competition to the market dominance of Apple’s iPad, will be available to purchase for roughly $300 less than the cheapest Apple equivalent.

Rival content publishers like the movie streaming service NetFlix, or US bookseller Barnes & Noble, which has its own tablet device, will be well aware of Amazon’s formidable media offering.

Running on a modified version of Google’s Android operating system, the Kindle Fire is a WiFi only device and incorporates a 7” colour screen. The aesthetic design is very similar to RIM’s Blackberry Playbook, which is unsurprising as both devices are made by Quanta.

“Kindle Fire competes with the iPad as far as accessible movie and TV titles but it’s a different twist on the tablet, which is exactly what the market needs,” he added.

“It is a stripped down offering. No camera, Bluetooth, 3G or 4G, video chat, and it has the 7” display that Steve Jobs laughed at. But for many consumers who can’t afford an iPad, it puts a tablet in their hands.”

Global release dates are not yet available, though the Fire device will be available for purchase in the US on November 15 for around $199. “These are premium products at non premium prices,” said Amazon chief executive Jeff Bezos. “We are going to sell millions of these.”