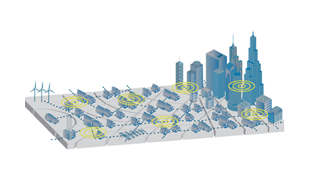 Many of us have dreamed of the types of autonomous “Smart Cities” we see in futuristic movies, the type where the city is living and breathing (ok, well at least functioning) by itself.

As we move towards an era where all devices are connected and speaking to each other; it’s becoming a reality.

MLL Telecom is helping to pave the way into this new frontier.

Paul Davison (PD), Systems Architect, gave TelecomsTech (TT) a demonstration earlier this week which shows off what they’re doing, and where the future lies for the Smart City…

TT: First of all, can you tell me about your role at the company?

PD: I’m a systems architect at MLL Telecoms – so I’m basically a software guy and a mad ideas person. I keep the systems running that keep everything going for our customers.

TT: So what are you guys up to? And what does the future hold for the ‘Smart City’?

PD: The company is basically a small networks provider – we do backhaul and wireless services for some of the bigger players… so we’re kind of in the backroom getting links working for people.

We’re here to talk about a ‘city agent’. We have a number of customers who do bizarre, wireless, things out there… in a shed somewhere or whatever. And we’ve got an ISP who we’re rolling-out a lot of hotspots in urban areas [for] to provide good coverage for people. Some of it is permanent infrastructure; some of it is [temporary] for shows, festivals…

The real challenge is what you do when something goes wrong with it, or how you know what’s going on in this remote equipment? So what we’ve done is produce an agent which gets installed with the telecoms equipment.

Often, this will be in a lamppost as this is a great way of doing urban deployments… We have a demonstration here based on a Raspberry Pi – the end result probably won’t be – which has lots of sensors attached to it.

It’s got a temperature, humidity, light, and shock sensor… but it’s also got an output as well which is going to a relay so that we can actually ‘power cycle’ the equipment [remotely].

The idea is in 95% of cases when something’s gone wrong with the network; you turn it off and on again… we’ve all watched The IT Crowd (recommended viewing.)

We’ve knocked up a website where we can see what’s going on, and if there is a problem, before they roll-out a truck which costs £500 before you’ve even done anything… we can just power cycle it and see if it comes back.

If it does, great, we’ve saved the customer some money and all from their comfy office.

The next step, for us, is to get the feedback from everybody we’ve spoke to. Then look at the hardware and look into making it smaller.

TT: What kind of timescales do you think we’re looking at before we see this kind of technology rolling-out widespread?

PD: It’s interesting… we’re still finding our way. Things like this that have one particular purpose, will hopefully become a bit more general. In this particular case we’re collecting all this environmental data… people might be interested in that. The council might be interested in pollution data if this is all down one road… or they may want to know about the vibrations from passing trucks.

Devices like this are feeding data into some thing. The danger we have is that everybody has their own database, and it becomes very fragmented. The challenge for us is saying; as the network grows, and we’ve got devices out there collecting all kinds of data, how do we get it into one central place so people can do interesting mash-ups and work out ways to use it so it benefits everybody?

When will it happen? Give it another year and I think things will really start moving…

Do you agree with Paul’s comments? How long before you think Smart Cities will really take off?